Week in Review: “The End of Fake”

We have no idea how the S&P downgrade of the U.S. is going to play out but one thing that does come to mind is the “end of fake.”  The end of fake demand generated by monetary and fiscal stimulus to replace the fake demand generated by fake wealth generated by negative real interest rates and policy induced asset inflation; and the end of fake confidence of the policymakers who believed they had a blank check for endless stimulus and bailouts.  This is true not just in the U.S. but across all countries.

At the end of the day this should be extremely deflationary and we hope the politicos and policymakers will learn that wealth and ultimately demand can only be created and sustained by increasing productivity.   But, you never know how they will respond and if the big sovereigns, including the U.S.,  start having problems rolling over their debt and are forced to rely on their central banks,  the end game is an entirely different story.   No wonder the gold price is over $1,700.

There are so many moving parts in this crisis.  Will the world’s leaders continue to dither? What about France’s sovereign rating? How much leverage is in the system?  Who and how many will blow up?  How much financial wealth will be destroyed before the markets hit bottom?  What is the fate of the dollar’s reserve currency status?  Will the next quantitative easing in the U.S. include the outright purchase of equities?   Buckle up. 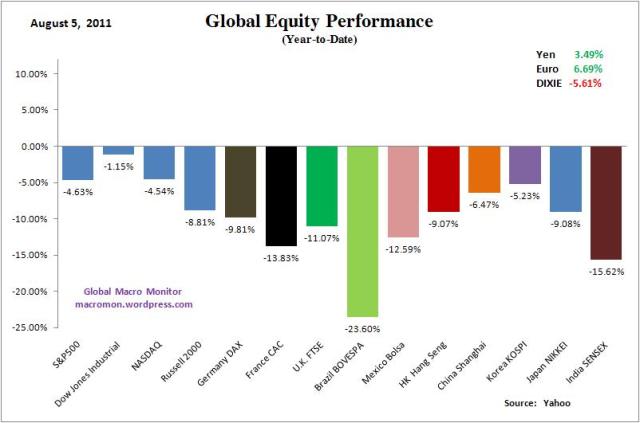 2 Responses to Week in Review: “The End of Fake”